Ever since I saw the Sisterhood of the Traveling Pants I became obsessed with the idea of traveling to Greece and riding a donkey up the cobblestone stairs along the coastline. Also, I’m slightly addicted to searching new travel destinations on Pinterest and when I saw pictures of the beautiful sunset amidst the blue domes in Santorini it immediately became one of my top travel destinations. My initial thoughts on the island were that it is very deserted, dusty, and nowhere near as picturesque as I had expected. While we were in Santorini we explored the two most popular towns, Fira and Oia, but I found both to be very underwhelming as there wasn’t much to do in either. Both towns have tons of little shops and fancy restaurants but really how much can one person look at the same souvenirs over and over again? And how many times does a person need to eat in a day? On a positive note, the view of the volcano looking out over the water and the and the sunset (weather permitting) is magnificent in both towns. In my opinion, the best view of the island is from the Oia castle. The castle extends off the coast just enough so you get to look back at the entire island at the row of white buildings lining the entire coast. Another positive thing about Santorini is that a lot of the roads are on a cliff so you get to look out over the entire island and the water (if you are not driving of course). During the couple days we were in Santorini we decided to take a boat cruise that was probably the highlight of our trip. The cruise gave us a tour around the island allowing us to see the black, red, and white sand beaches, along with the famous lighthouse. We also got to hop off the boat and swim in a hot spring and simply just relax and soak up the sun. The trip also included lunch and free drinks which were an added bonus. To give my honest opinion (coming from a girl that was super hyped to go to Santorini) is that it isn’t worth the hype that it’s been given. If we didn’t do the boat cruise the only thing that was positive about this island was the view from the coastline and the view from the road. Although I did really enjoy the view I don’t think paying a ton of money (the island isn’t cheap) to go watch a sunset over some pretty white buildings is worth making the trip and if I were to ever go back to Greece I would definitely rather go to Mykonos. 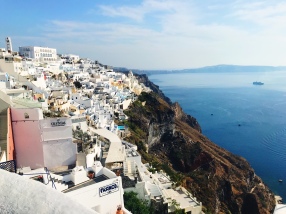 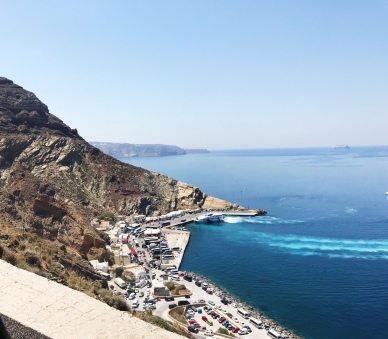 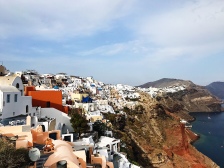 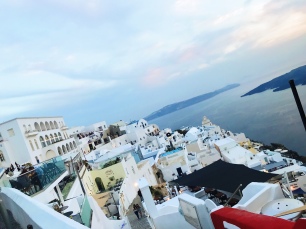